ATLANTA – September 13, 2018 – Zagoria Law, LLC, and Jeff Klein P.C. have received a winning jury verdict on behalf of Katrina Bebee, following an attack by a boxer dog. The case was originally with Jeff Klein, P.C. Jeff associated Zagoria Law to handle the litigation and act as lead counsel.

On February 12, 2016, Katrina Bebee, a postal employee, was delivering a package to the home of Paul and Nicole Jones. The Defendants had left their canine named Roy Jones Jr. in the care of their eleven-year-old son while they were out of the home. Roy Jones, Jr. escaped through the front door and attacked Ms. Bebee, as she headed back to her work vehicle. Ms. Bebee sustained bites to her right forearm and right leg. She suffered severe emotional distress and scarring, as a result of the incident. Also, she incurred $4,296.90 in medical specials, which included a plastic surgery consult with Julian Gordon, MD, DFACS.

Roy Jones, Jr. had a history of attacking people and Zagoria Law was able to prove careless management by the Defendants in their response to prior bites. Chad Prather, a FedEx employee, testified that he was bitten in 2013 by the defendants’ dog while delivering a package to a neighbor. Katherine Hoyt, a neighbor of the defendants, was bitten while walking across the street during the 2014 Atlanta snowstorm.

“Ms. Bebee was simply doing her job when she was attacked by a family pet that was not properly restrained,” stated attorney David Zagoria. “At Zagoria Law, our priority throughout this case has been the physical and emotional well-being of Ms. Bebee.” “We appreciate Jeff Klein, Esq. trusting us to work this case with him and bring justice and closure to Ms. Bebee.”

The case was tried in Fulton State Court before the Honorable Susan E. Edlein. 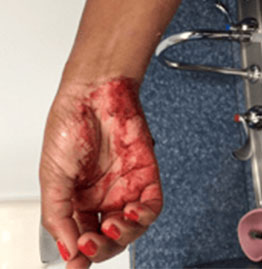