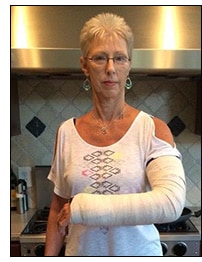 today announced it has negotiated a pre-trial settlement of $400,000 in Humble v. EPPS 57th Restaurant, d/b/a 57th Fighter Group. The suit, State Court of DeKalb County civil action file number CAFN 15A57453E5, was filed due to a fall sustained by plaintiff Donna Humble at the 57th Fighter Group Restaurant in February 2014. Auto Owner’s denied liability from the outset. Defendant’s motions for summary judgment in the case were denied by Honorable Mike Jacobs, leading to the settlement one month before trial.

The incident occurred while Humble was dancing with friends at the 57th Fighter Group Restaurant. While on the dance floor, Humble tripped and fell, which the suit alleged was due to the clear tape being used to repair a defect in the flooring. Humbled suffered a fractured distal radius and ulnar styloid because of the fall, which was surgically repaired by Bryce Gillespie, MD. In the initial filing, Zagoria sought an undetermined amount of damages for Humble, including medical, hospital, nursing, medication and miscellaneous expenses she accrued as a result of her injuries.

“Slips and falls remain a leading cause of injuries and restaurants with dance floors are particularly burdened by such incidents,” said Zagoria Law Founder and Principal David Zagoria. “It is unfortunate that these hazards so often occur and even more disconcerting that they cause so many serious injuries. In Ms. Humble’s case, we are very pleased to obtain fair and just compensation for her.”